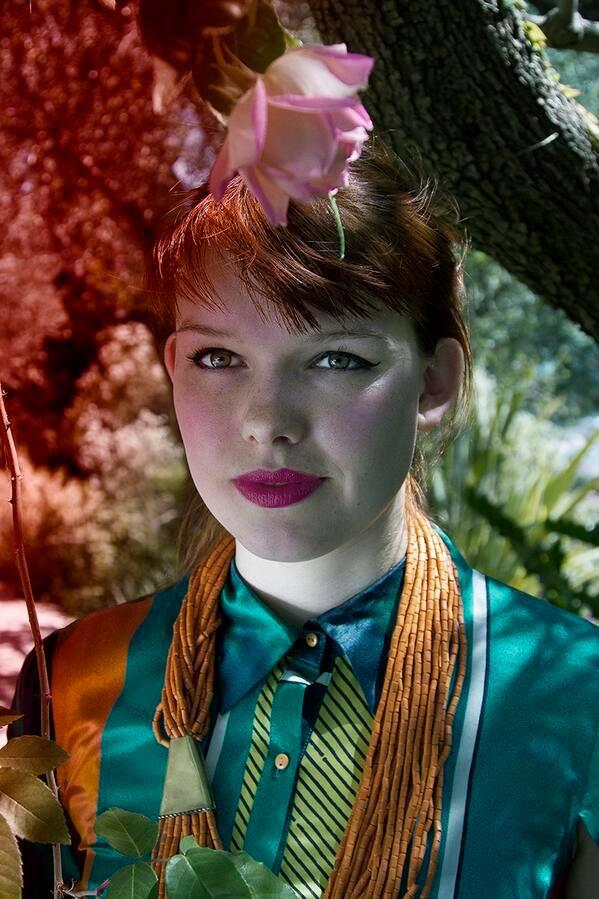 This collection is about the clash between sportswear and luxury. The concept of this collection is based on the famous cut-outs of Matisse, his final work. These enormous collages in bright colours represent his own imaginary world. It was this world Frowijn wanted to create for a modern young woman during our era, where speed is an important subject. By cutting and pasting with paper, she created a modern cut out-suit for women, in the same bright colours and shapes as the ones Matisse used, but carried out in fabrics used in sportswear, such as lycra. Above these suits she designed modern pieces, based on the military dress code, and carried out in light, rich, artisanal fabrics with self designed prints. Most of these fabrics are hand painted or embroidered.  The silhouettes are voluminous and layered, and the transparency of the fabrics causes an eclectic play-a-long between background and foreground: a fresh kind of luxury is the result. 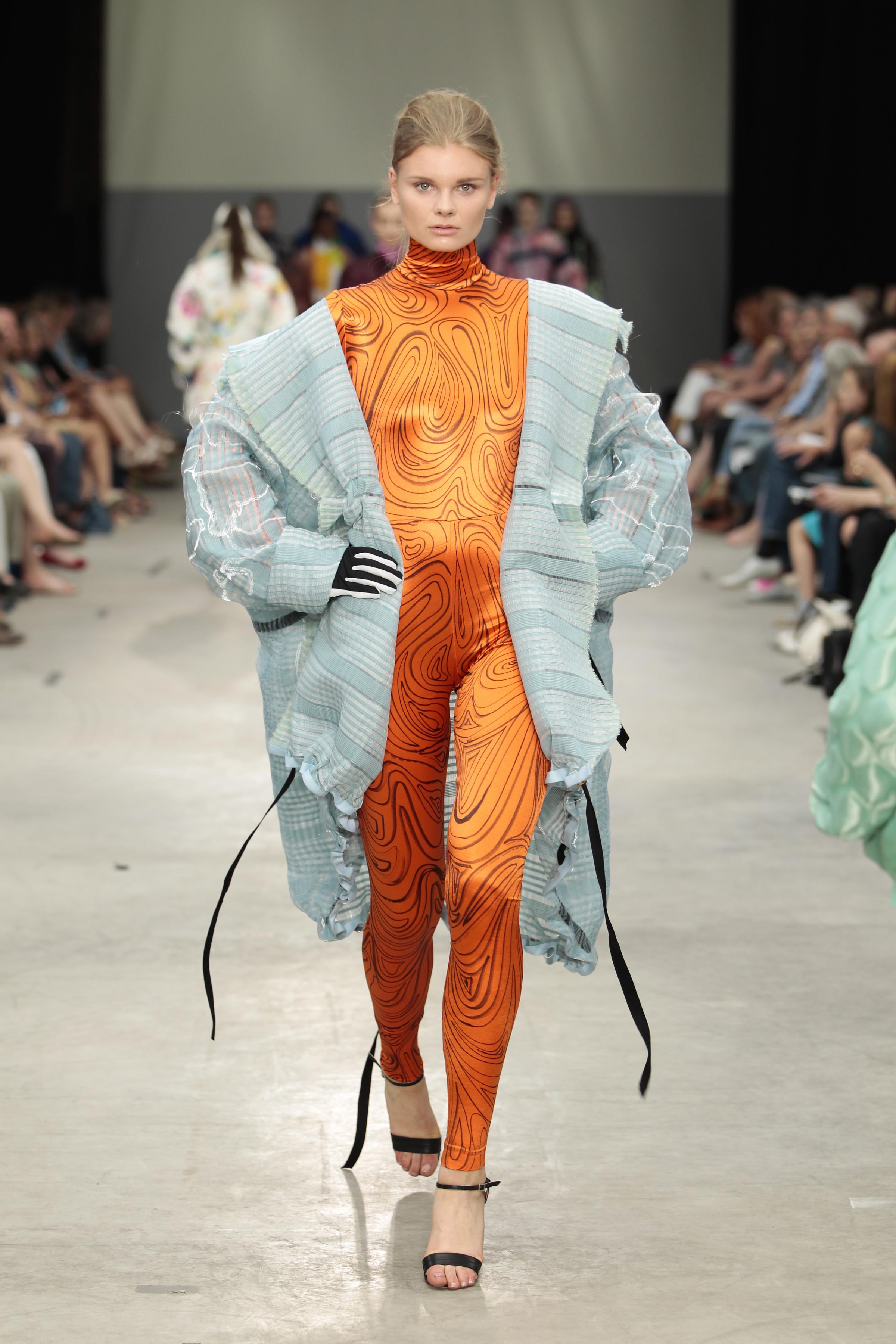 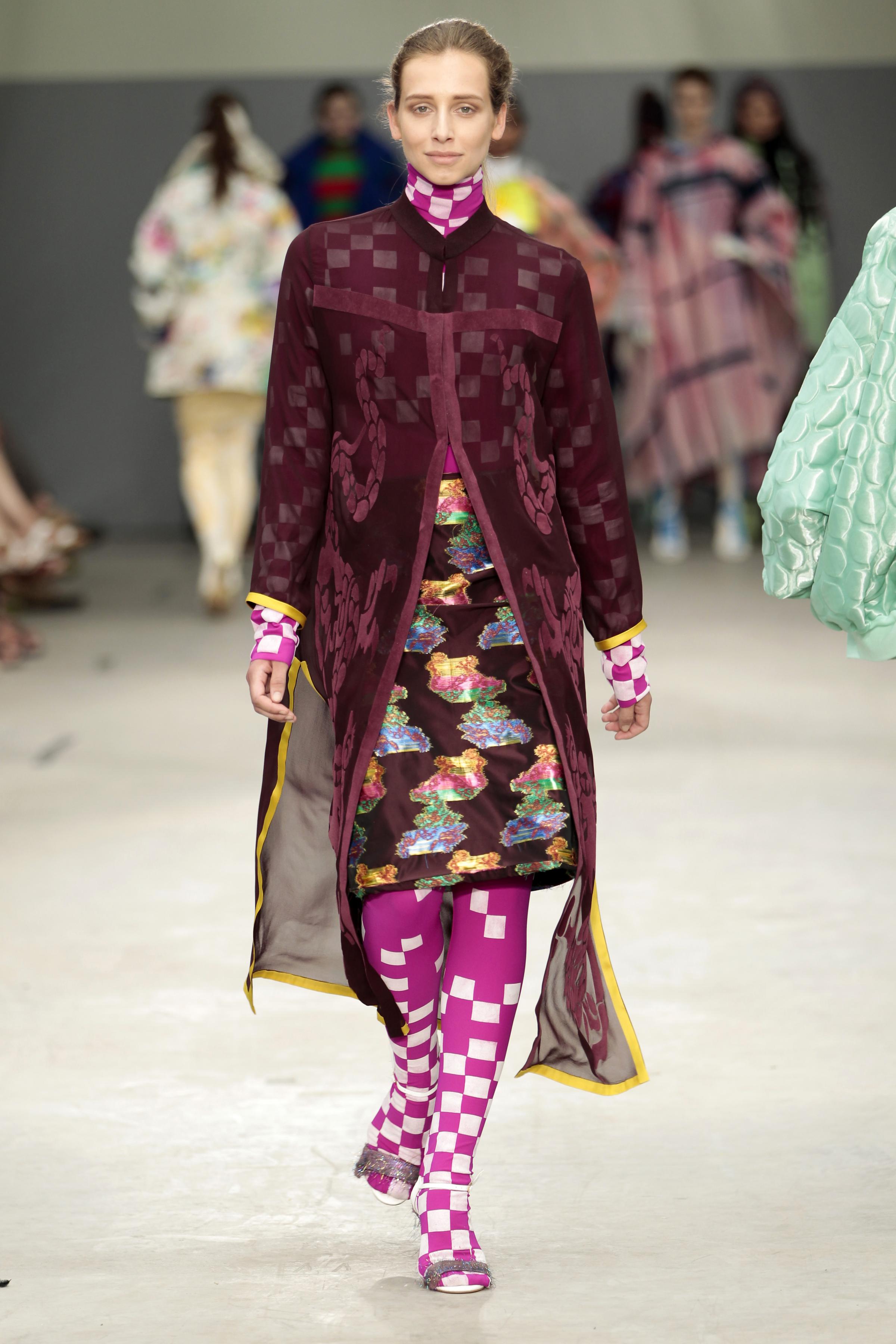 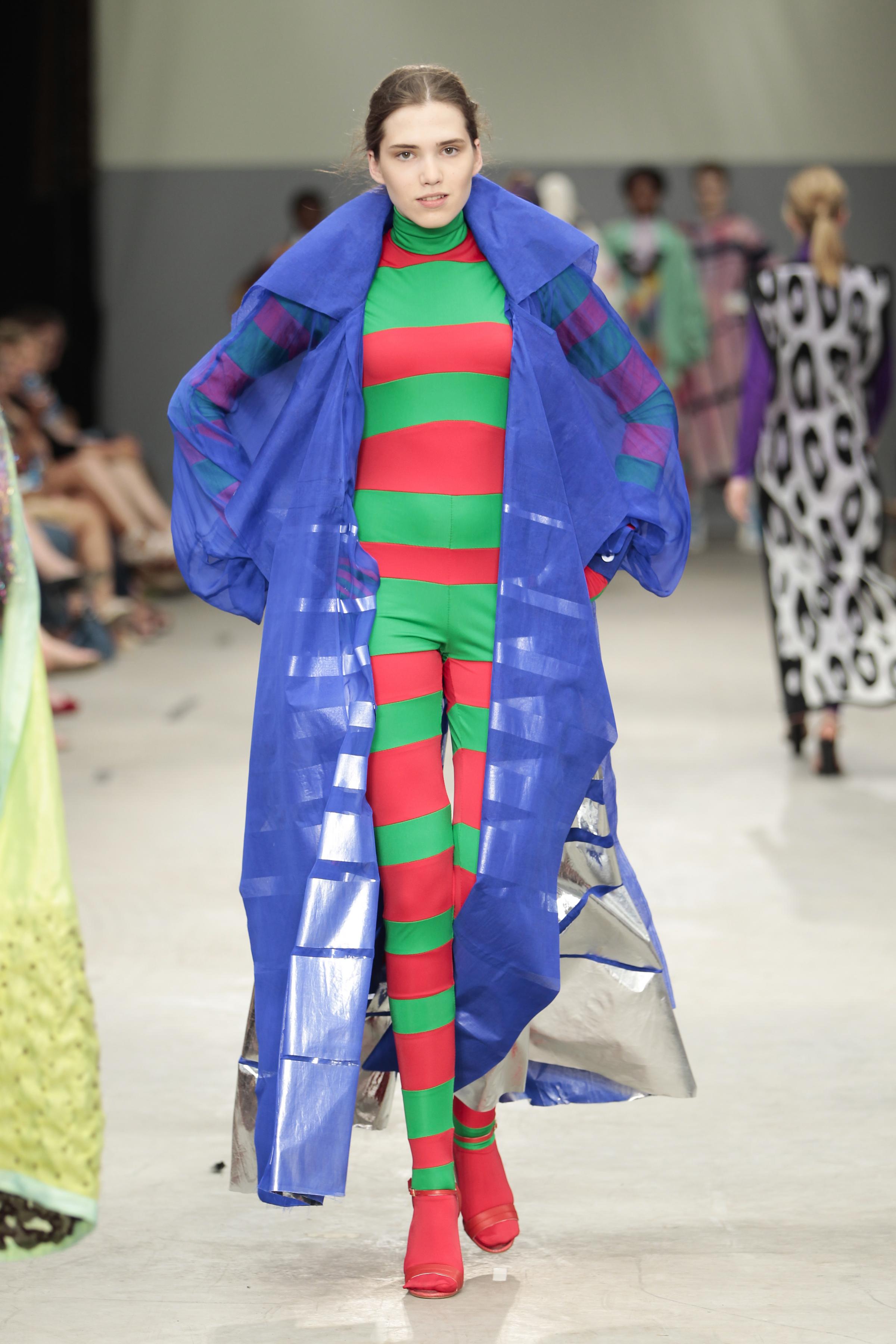 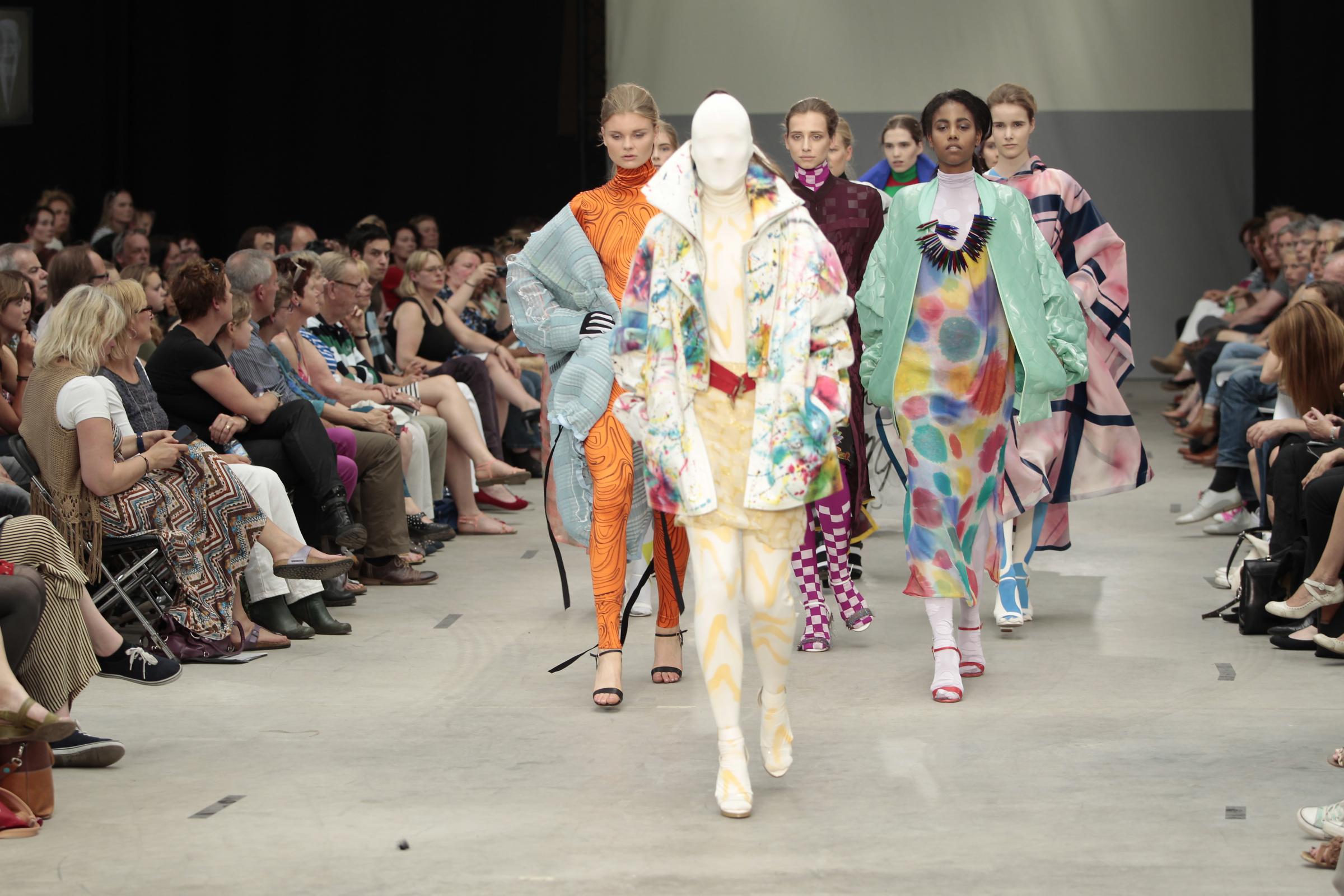 Liselore Frowijn studied a BA in Fashion Design at the ArtEZ Institute of Arts in Arnhem, the Netherlands, where she graduated with honours in 2013. Her final collection “Afternoon of a Replicant”, was met with acclaim.

This first collection was based on the juxtaposition between sportswear and luxury, and drew inspiration from Henri Matisse’s late cut-outs. By using cutting and pasting techniques, Frowijn created a modern suit for the contemporary woman, enlisting the same bold palette that Matisse used, but spreading it across innovative sportswear fabrics. Alongside these suits she designed a range of modern pieces based on military dress codes constructed in rich, artisanal fabrics with self-designed, hand-painted or embroidered prints. The dominant silhouette was voluminous and layered, while plays on fabric transparency created an interplay between background and foreground. A fresh, contemporary breed of luxury was born.

This collection earned Frowijn the Frans Molenaar Dutch Couture Award in 2013. She was also awarded the Prix Chloé at the Hyères International Festival de la Mode 2014, taking her place as one of ten finalists to design a piece for Chloé.

In Summer 2013 she did an internship with the innovation team of the fabric company Mantero Seta S.p.A. in Como, Italy, where she developed exclusive painted fabrics for clients in the high-luxury fashion industry, including Prada, Chanel, and Gucci. In October 2013, Frowijn worked on a six-month fashion design project at the prestigious design company Vlisco in the Netherlands, developing wax textiles in a business that dates back to the West-African market in 1846.

Alongside these endeavours, Frowijn is the co-founder of fashion collective The Much, Much. Comprising eighteen young and talented fashion designers from ArtEZ, the collective inaugurated itself with guerrilla shows and a special event with the Dutch ambassador during Paris Fashion Week, October 2013. (www.themuchmuch.com)

As a designer, Frowijn feels the continuous drive to capture and retransmit the energy she gets from art, music, people, and different cultures. For her, fashion is the best medium to weave all these different threads together into one eclectic outcome. Fashion is her playing field, and her challenge is to discover the unexpected. Her designs walk the fine line between high and low culture, each new piece a living painting carefully constructed to achieve the perfect balance between aestheticism and imperfection.

Her designs are for women with a curious heart; explorers at the core, ambitious and independent. The concept of her second collection, S/S 15’s “Fracture Space” was the woman at one with herself. She moves elegantly and dynamically, and lets no one interrupt her energy. She instinctively courts luxury, knowing it in its purest form. The core look of this collection centred on tweed biking jackets and polo shirts finished with sportswear piping. Frowijn combined her self-developed and hand-painted fabrics with outdoors materials, adding a touch of opulence with rich Italian jacquards. Frowijn presented this collection along with a new fragrance at SALON/BIG BANG ’14 at the Oude Kerk in Amsterdam. The collection campaign was shot by talented photographer Olya Oleinic.

In October 2014, Frowijn was nominated for the Young Designer Award during Dutch Design Week in Eindhoven. From Autumn 2014 through to May 2015, she worked on the F/W 15 and S/S 16 collections at Mantero 1902 in the role of creative director. These collections were sold in international stores from September 2015 onwards.

A preview of her third collection, F/W 15-16, “No.3 Formania” was presented at the opening night of Mercedes-Benz Fashion Week, Amsterdam, as well as in Paris during the RTW fashion week, where the show was on Mode à Paris’s official off-schedule calendar.

In April 2015, this collection was showcased on the FORMERS platform at Hyères International Festival de la Mode 2015.

In September 2015, Frowijn presented her S/S 16 collection in showrooms in London and Milan during RTW fashion week, as well as in a runway show and showroom in Paris. Her new F/W 16-17 collection will be presented in a showroom during Milan Fashion Week, and on March 1st at a runway show in Paris as part of the official Mode à Paris Fashion Week calendar.